New York, September 9 - We all know Ricky Martin has lived la vida loca and Shakira’s hips would never lie, but did you know Latino musicians like Cuban-born Rudy Sarzo and Mexican-born Carlos Cavazo have been making their mark in American Hard Rock and Heavy Metal for over three decades? They may not have “crossed-over” during a high profile VMA performance, but Latinos have been providing the bass lines, guitar licks and vocals for bands such as Quiet Riot, Ozzy Osbourne, Metallica and Slayer way before J Lo was getting loud on the 6.

A Quiet Riot: Latinos Making Noise in Hard Rock & Heavy Metal is a popstract tribute by visual artist Franck de Las Mercedes to those who ventured beyond cultural assumptions and helped pioneer a movement that influenced lifestyles, fashion, attitudes, and language. Proving that everything is not always what it seems, these rock gods have created their own latin rhythm. 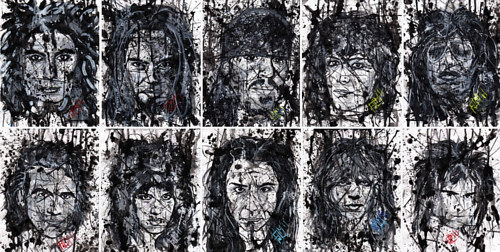